…your one-way ticket to your darker side…

Unless you’ve been living under a rock or not keeping up with the world news, you are all probably aware of the fact that part of the entire continent of Australia is suffering from the worst documented cases of bush fire in their recorded history. At the time of this post, it’s estimated that over a BILLION animals have been lost to the flames, and the koala population is being decimated and are now being categorized as endangered, though it’s not reflected on any official endangered species list as of yet.
Here in the United States, there’s not been too much national coverage of the crisis in Australia until recently, and for the life of me I can’t understand why. America has an attitude of “well it’s not affecting us, so why should we care?” that’s just so dangerous and selfish to maintain. Climate change is a myth to a big portion of the masses, and that false claim is perpetuated by our commander in chief, who would rather mock and get into Twitter fights with a 16 year old girl on the spectrum who is doing amazing things to bring visibility to that fact, than do any kind of good and try to change things and be a better leader than he is being…but I digress. I never bring my political views and beliefs into my blog posts, but I couldn’t resist this time, and to say I am disappointed in the administration of my country is putting it very mildly and lightly. 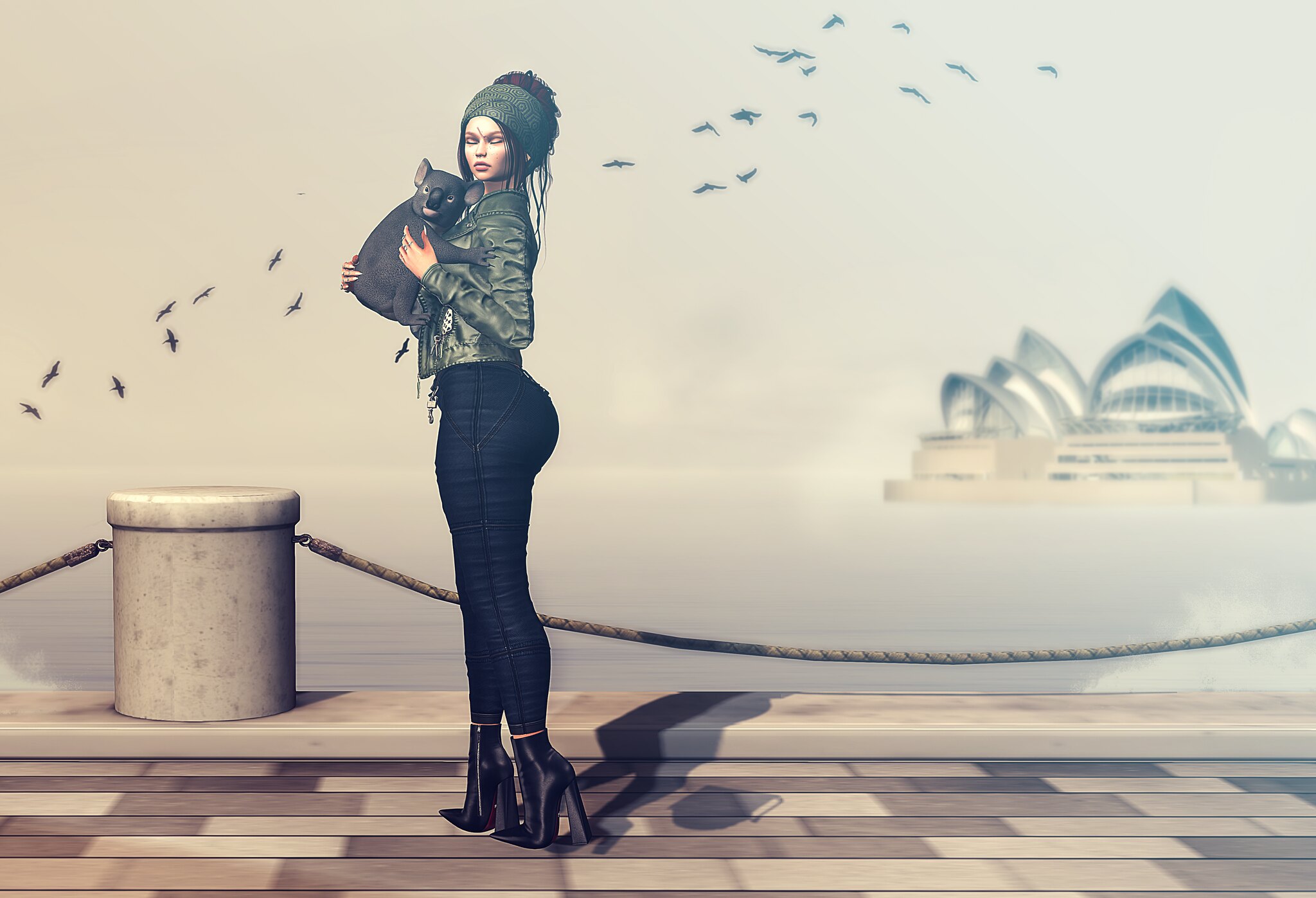 Allyson Dwyer Applewyte is the creator of this pose set I’m featuring, and she is the owner of Something New Poses. She lives in Australia. She’s donated to numerous organizations during the fire outbreaks in Australia, and now she is asking us, various Second Life residents, to use our voices and our love of shopping, to help her, and help her home country. She has released some poses at her store and is donating 100% of the proceeds to the RSPCA NSW-Bushfire Appeal. From what I read on another blogger’s post, so far Ally has said that the poses alone that she has for this fundraiser have raised nearly 30,000L. For this post only being 150L, that is a lot of people buying and donating. There is a tip jar near all of the items available that you can drop donations into if you’re not really a photo taking kind of person.
Australia needs us all to help them right now. Even when the fires eventually are out, there will be an extremely long and weary road to recovery ahead of all of the residents there.

Ways you can help
Australian Red Cross: Since July, the Australian Red Cross has assisted more than 18,600 people affected by the fires, according to its website. The organization says that it is currently supporting thousands of people in evacuation centers and recovery hubs. Learn more about where your money goes and donate at redcross.org.au.
(The American Red Cross is also accepting donations for bushfire relief efforts. More at redcross.org.)
First Nations Communities: Musician and community rights advocate Neil Morris, a Yorta Yorta man, has created a GoFundMe page to provide “culturally sensitive, specific direct support” to First Nations Communities displaced by the fires. Donations – which have reached nearly $600,000 – fund temporary relocation costs, basic amenities, resettling expenses and more. Learn more at au.gofundme.com.
Foundation for Rural & Regional Renewal: This Australian nonprofit is raising funds to distribute as grants to rural and regional communities for disaster recovery projects. The grants could be used to repair community infrastructure, provide psychological support to those affected and more. Donate frrr.org.au.
Australia Zoo Wildlife Hospital: Bindi Irwin, the daughter of famed wildlife conservationist and “Crocodile Hunter” Steve Irwin, has been taking in many displaced animals at the Australia Zoo Wildlife Hospital, which is owned by her mother, Terri. The Queensland hospital is “busier than ever,” Irwin said in an Instagram post. The zoo’s Wildlife Warriors program is raising money for new enclosures to house flying foxes and koalas injured or displaced by fires. Donate at wildlifewarriors.org.au.
World Wildlife Fund Australia: This chapter of the international wildlife conservation organization is accepting donations to care for injured wildlife and, when the fires clear, to plant 10,000 native trees in critical koala habitat, including in “koala triangle,” the heartland of Australia’s healthiest wild koala populations. Donate at donate.wwf.org.au.

*Blogger’s note: I am aware that I have taken some geographic liberties with this photo.*

Shining a Light on Virtual Art

Second Life Rotten To The Core...

The closet of a witch

my little blog about SL fashion and whatever comes to my weird mind, contact me for collaborations or sponsoring

Diary of a Virtual woman

All the best locations and shopping in Second Life

The Art of Fantasy

Bringing you the Wonderful World of Second Life Fashion, Home, Living and Music

❀ I dare you to undress me...❀

This WordPress.com site is the cat’s pajamas

The Long & Short Of It All

A lifestyle blog about the virtual world of Second Life